NOTE: This was originally posted on March 29, 2018 and will be updated. The Post will have all of the shocking details.

In order to provide the reader with insight into this horrific incident involving the criminal justice system, or lack thereof, it is important for readers to understand the facts of this case.

An update to this article will follow, once again revealing the complete and utter disregard for the victims of crime in the Baltimore County Criminal Justice system.

The update will deal with the victims encounter with both the criminal justice system and the representation they received from their attorneys pertaining to the civil case.

Many of you will be shocked at the results of what the Post has uncovered.

We recently published an article about a repeat DUI driver destroying the lives of a middle-class family. In that piece, we mentioned the very real possibility that another bleeding heart judge and a state’s attorney who has no concept of justice could end up letting a criminal off the hook yet again.

We really wish we weren’t right about the outcome, but things are certainly leaning in that direction.

For those who have not kept pace with this story, here is the backstory about this latest horrific lack of justice.

As Mrs. Juana Church spoke to the judge during her witness impact statement, she tearfully explained her “life sentence” of being handicapped as a result of Mr. Tews’ third DUI offense, which left a trail of bodily injury and destruction.

The judge, Miriam Huthcins, seemed unmoved by Mrs. Church’s statement. In Judge Hutchins’ opinion, any jail time for Mr. Tews would impede his ability to rehabilitate himself.

Pardon us as we ask the question, “What the hell was this judge thinking???” Shouldn’t the judge be more concerned about the victim than the criminal?

Mr. Church told us that Mr. Tews’ defense attorney stated that her client had not been in trouble since the arrest. However, according to the Maryland Case Search, that statement is false. According to case records, Mr. Tews was charged with another traffic violation in 2018–operating a motor vehicle without a driver’s license. In fact, when the Post took another look at Mr. Tews’ record, we found three additional charges after the date of the accident that crippled Mrs. Church.

The Post would like to ask the judge when this embodiment of self-righteousness began. However, that would only be the first (or second) in a long series of questions we have about her involvement in the case. We wonder why the BCSAO assigned a retired Baltimore City judge to a county DUI case:

Another question would involve why the case was moved to Towson District Court. The Offense Took Place in Dundalk; under normal circumstances, that means the case should have been tried in the Essex District Court system.

All of this is quite disturbing, in our opinion.

To show you how egregious the lack of justice in this case was, there were total of 19 charges against Mr. Tews. Yet only one charge, hit-and-run, remains–every other charge became part of yet another plea deal with the state’s attorney’s office.

You read that right, folks. The other 18 charges have been recorded as STET.

Mr. Church said the defendant’s lawyer spoke at length about how remorseful he was, and how he was seeking treatment for his alcoholism. How is this remorse and treatment plan any different than the defendant’s previous DUI offenses?

While interviewing Mr. Church, the Post prepared him for what we believed would be the outcome of the case. Following the outcome, Mr. Church made the following remark:

“The trial turned out exactly the way [the Post] stated it would. My wife is crippled for life, but this man does not spend one day in jail.”

To add injury to insult, the defendant must pay restitution to the victims of this travesty. As the old saying goes, “You can’t get blood out of a turnip.”

This is yet another chapter in the criminal justice system saga in Baltimore County. We asked the Deputy State’s Attorney, Mr. John Cox, if the victim was one of his family members, based on the outcome of this case, would he believe that justice was served.

His answer was an astounding YES!

And that, folks, is more telling than anything we could write. We couldn’t make up this stuff.

The following comment appears on the Baltimore County State’s Attorney’s site. We dare anyone to find truth in this statement: 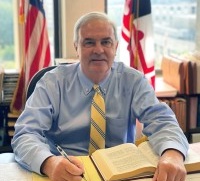 Victims and witnesses in criminal cases deserve to have their voices heard. It is our goal at every stage of the prosecution process to be aggressive and effective advocates for the victims of crime and the citizens of Maryland. We want to help victims and witnesses navigate the often perplexing criminal justice system.

Information for victims and witnesses including daily docket information, directions to court locations, and ways to contact our office are provided to help you find the information that you need.

Some of you may think that is a rather harsh statement for the county’s top law enforcement officer. After reading this column, you should agree with the statement: No justice, no peace.

Mr. Cox admitted to the Post that more than 87% of all criminal cases prosecuted by the BCSAO were plea agreements.

Most police officers call such agreements “copping a plea.” Mr. Cox took issue with those words and insisted on using the term plea agreement, which he believed is far more appropriate.

The Post apologizes to Mr. Cox for not being politically correct, but political correctness is killing this country.

Finally, the Post asked Mr. Church to let us know when he gets his first check from Mr. Tews.

Again, we hope that we aren’t right, but we believe that check will take a very, very long time to arrive … if it ever does.

Note:  The Post contacted Mr. Cox’s by phone prior to publishing in order to verify all facts of this column. As of publication time we have not heard back from the SA’s office.